The humanitarian community’s 2012-2013 Consolidated Appeals Process (CAP) for the occupied Palestinian territory (oPt) has a narrower scope than in previous years, focusing on two strategic objectives: improving the protective environment, including access to essential services like health care and education, and tackling food insecurity especially in areas where the Palestinian Authority (PA) has limited access.

Policies related to Israel’s occupation are still the main driver of serious protection and human rights concerns, according to the CAP.

The two-year aid strategy document requests US$416.7 million to implement 149 relief projects in 2012 (17 by local NGOs, 84 by international NGOs and 48 by UN agencies) in fields such as agriculture, water, sanitation and hygiene, cash for work, and food and cash assistance.

CAP tackles the most urgent humanitarian needs of 1.8 million vulnerable Palestinians in the Gaza Strip, Area C of the West Bank, East Jerusalem and the Seam Zone – the area between the “Separation Barrier” and the Green Line. 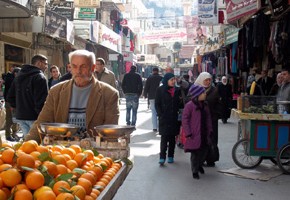 “Protecting and preserving the whole range of basic human rights are the focus of this CAP,” oPt Resident Humanitarian Coordinator Maxwell Gaylard told IRIN, including violations of international humanitarian law, and the right to dignity and a normal life.

Aid workers in oPt are looking to address the root protection problems that are creating humanitarian needs.

Displacement remains a chief protection concern. Nearly 1,100 Palestinians (over half of them children) were displaced due to home demolitions by Israeli forces in 2011 – over 80 percent more than in 2010, according to the UN Office for the Coordination of Humanitarian Affairs (OCHA).

CAP programmes address this problem through shelter assistance, legal aid and by campaigning for Palestinian rights, in addition to protection presence programmes.

For example, the World Council of Churches sponsors the Ecumenical Accompaniment Programme in Palestine and Israel (EAPPI), bringing internationals to the West Bank to provide a protective presence for vulnerable Palestinian communities, where they monitor the conduct of Israeli soldiers and settlers.

The “global protection cluster working group” defines protection as activities aimed at obtaining full respect for the rights of the individual in accordance with human rights law, international humanitarian law and refugee law.

More than physical security, protection encompasses civil and political rights, such as the right to freedom of movement, the right to political participation, and economic, social and cultural rights, including the right to education and health.

In situations of conflict that obligation extends to all parties, and according to the UN, in the case of the oPt the state of Israel as the occupying power has an obligation under international humanitarian law to ensure the welfare of the Palestinian population.

Some 30 percent of the Palestinian population in the West Banka and Gaza are food insecure, including more than half the Gaza population, according to the UN.

The root cause remains the loss of livelihoods and lack of income opportunities due to Israel’s blockade of Gaza, and its closure regime in the West Bank, according to the Appeal.

Aid workers in the region are seeking ways to enable Palestinians to meet their own needs, particularly after the World Bank, the International Monetary Fund and UNESCO announced in spring 2011 that PA institutions were prepared for statehood after the completion of the Palestinian Reform and Development Plan (PRDP – Palestinian Prime Minister Salam Fayyad’s ambitious two-year state-building plan).

The CAP was developed in consultation with the PA, particularly the ministry of planning and administrative development, to ensure coherence with Palestinian development strategies, such as the PRDP.

However, “the PA’s capacity to work as government is hindered by the Fatah-Hamas divide,” said minister of planning and administrative development Ali Jarbawi during the launch of the Appeal.

“Serious shortages of drugs – some life-saving – and medical disposables continue in Gaza, due to mistrust between Fatah and Hamas,” said World Health Organization head in Jerusalem Tony Laurance. “If this cannot be resolved, Palestinians may have to look to donors,” he said.

However, three years after the end of Cast Lead, the UN Relief and Works Agency (UNRWA) has launched an emergency appeal for Gaza and the West Bank worth just over $300 million.

“The emphasis on protection interventions is due to the nature of the humanitarian situation in the oPt,” UNRWA spokesperson Chris Gunness told IRIN. “This is very much a protection crisis, whereby access and movement are continuing to be eroded and vulnerability is on the rise,” he said.

Most UNRWA projects within the emergency appeal are also part of the CAP.