These numbers should give us pause. While the Administration has publicly conceded that there is no military solution in Afghanistan, and claimed that it supports ‘Afghan-led reconciliation’, its policy on the ground is marked by a refusal to establish a timetable for full military withdrawal. The Administration has even backed away from the ‘substantial drawdown’ of troops that was promised to begin this July, instead opting for a token drawdown that will leave about twice as many troops in the country as were there when he assumed office, with no plan for their removal. See Just Foreign Policy’s press release marking this grim milestone here. 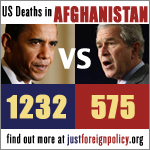 Click here for an explanation of the figures http://www.justforeignpolicy.org/obamavsbush/explanation,]

We must ask ourselves how many more lives will be sacrificed before the Obama administration sets a clear end date for America’s longest war.

Simply copy and paste the HTML below. If you email us telling us where you’ve posted it, we’ll add your site to the list of sites hosting the counter.