The Ghost and the Machine: Drone Warfare and Accountability

Fazillah, age 25, lives in Maidan Shar, the central city of Afghanistan’s Wardak province.  She married about six years ago, and gave birth to a son, Aymal, who just turned five without a father. Fazillah tells her son, Aymal, that his father was killed by an American bomber plane, remote-controlled by computer.

That July, in 2007, Aymal’s father was sitting in a garden with four other men. A weaponized drone, what we used to call an Unmanned Aerial Vehicle or UAV, was flying, unseen, overhead, and fired missiles into the garden, killing all five men.

Now Fazillah and Aymal share a small dwelling with the deceased man’s mother.  According to the tradition, a husband’s relatives are responsible to look after a widow with no breadwinner remaining in her immediate family. She and her son have no regular source of bread or income, but Fazillah says that her small family is better off than it might have been: one of the men killed alongside her husband left behind a wife and child but no other living relatives that could provide them with any source of support, at all. 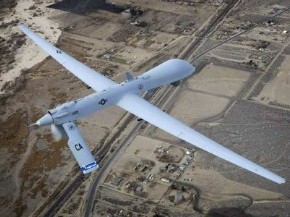 Aymal’s grandmother becomes agitated and distraught speaking about her son’s death, and that of his four friends. “All of us ask, ‘Why?’” she says, raising her voice. “They kill people with computers and they can’t tell us why. When we ask why this happened, they say they had doubts, they had suspicions.  But they didn’t take time to ask ‘Who is this person?’ or ‘Who was that person?’  There is no proof, no accountability.  Now, there is no reliable person in the home to bring us bread.  I am old, and I do not have a peaceful life.”

Listening to them, I recall an earlier conversation I had with a Pakistani social worker and with Safdar Dawar, a journalist, both of whom had survived drone attacks in the area of Miran Shah, in Pakistan’s Waziristan province.  Exasperated at the increasingly common experience which they had survived and which too many others have not, they began firing questions at us.

“Who has given the license to kill and in what court?  Who has declared that they can hit anyone they like?”

“How many ‘high level targets’ could there possibly be?”

“What kind of democracy is America,” Safdar asks, “where people do not ask these questions?”

One question Fazillah cannot answer for her son is whether anyone asked the question at all of whether to kill his father.  Forbes Magazine reports that the Air Force has sixty-five to seventy thousand analysts processing drone video surveillance; A Rand review states they actually need half again that number to properly handle the data.  Asked to point to the human who actually made the decision to kill her husband, she can only point to another machine.

In June 2010, Philip G. Alston, then the UN’s Special Rapporteur on extrajudicial, summary or arbitrary executions, appeared before the UN Human Rights Council and testified that “targeted killings pose a rapidly growing challenge to the international rule of law … In a situation in which there is no disclosure of who has been killed, for what reason, and whether innocent civilians have died, the legal principle of international accountability is, by definition, comprehensively violated.”

“Such an expanded and open-ended interpretation of the right to self defense comes close to destroying the prohibition on the use of armed force contained in the United Nations Charter.  If invoked by other states in pursuit of those they deemed to be terrorists and to have attacked them, it would cause chaos.”

This past week, on February 23, the legal action charity” Reprieve” spoke up on behalf of more than a dozen Pakistani families who had lost loved ones in drone strikes, and asked the UN Human Rights Council  to condemn the attacks as illegal human rights violations.

“In Pakistan, the CIA is creating desolation and calling it peace,” said Reprieve’s Director Clive Stafford Smith. “The illegal programme of drone strikes has murdered hundreds of civilians in Pakistan. The UN must put a stop to it before any more children are killed. Not only is it causing untold suffering to the people of North West Pakistan – it is also the most effective recruiting sergeant yet for the very ‘militants’ the US claims to be targeting.”

“If President Obama really believes the drone strikes have ‘pinpoint’ accuracy, it has to be asked where the deaths of kids like Maezol Khan’s eight-year-old son fit into the CIA’s plan.  If the US is not prepared to face up to the reality of the suffering the strikes are causing, then the UN must step in.  The international community can no longer afford to ignore the human rights catastrophe which is taking place in North West Pakistan in the name of the ‘War on Terror’.”

Drone warfare, ever more widely used from month to month from the Bush through the Obama administrations, has seen very little meaningful public debate.  We don’t ask questions – our minds straying no nearer these battlefields than in the coming decades the bodies of our young people will – that is, if the chaos our war making engenders doesn’t bring the battlefields to us.  An expanding network of devastatingly lethal covert actions spreading throughout the developing world passes with minimal concern or comment.

So who does Fazillah blame?  Who does one blame when confronted with the actions of a machine?  Our Pakistani friend asks, “What kind of a democracy is America where people do not ask these questions?”  Becoming an actual democracy, with an actual choice at election-time between war and peace rather than between political machines vying for the chance to bring us war, seems to many Americans, if some of the less-reported polls are to be believed, a near-unachievable goal.  The U.S. has become a process that churns out war – today Afghanistan and (in any real sense) Iraq; tomorrow Iran and Pakistan, with China securely, however distantly, on the horizon – and for those of us with any concern for peace, a principled opposition to war ultimately requires a determination to make the U.S. at long last into a democracy, striving as Dr. King enjoined us, in “molding a recalcitrant status quo with bruised hands until we have fashioned it into a brotherhood.”

It must begin with compassion  – powerless compassion perhaps,  perhaps only the ghost of dissent, but compassion for people like Fazillah and Aymal, – and with deciding to be human, maybe only the ghost of a human, but alive in some way and alive to what our assent,  and perhaps especially our silence are accomplishing in the world.  Humanity is the first thing to be won back – and then, if we have the strength, relentlessly defended – against indifference, complacency, and, above all, inaction.  If enough of us refuse to be machines, if enough of us refuse enough, can democracy, and even peace, not be at last achieved?  But first comes the refusal.

Fazillah wants a peaceful life. She doesn’t want to see any more people killed, any more ghosts like that of her husband.  Any more bodies, burned (as she recalls) so charred that they are almost unrecognizable one from another.

“I don’t want this to happen to anyone,” says Fazillah. I don’t want any children to be left without parents.”