US Outrage Over Syria Veto at UN Rife With Hypocrisy

Official Washington has been rife with condemnation at the decision by the governments of Russia and China to veto an otherwise unanimous UN Security Council resolution condemning the ongoing repression in Syria and calling for a halt to violence on all sides; unfettered access for Arab League monitors; and “a Syrian-led political transition to a democratic, plural political system, in which citizens are equal regardless of their affiliations or ethnicities or beliefs.”

Human rights activists were outraged, as they should be. What is striking, however, is the response from US officials and pundits so roundly condemning the use of the veto by these two permanent members of the Security Council to protect the Syrian regime from accountability for its savage repression against its own citizens.

A little perspective is required here: Since 1970, China has used its veto power eight times, and Russia (and the former Soviet Union) has used its veto power 13 times. However, the United States has used its veto power 83 times, primarily in defense of allies accused of violating international humanitarian law. Forty-two of these US vetoes were to protect Israel from criticism for illegal activities, including suspected war crimes. To this day, Israel occupies and colonizes a large swath of southwestern Syria in violation of a series of UN Security Council resolutions, which the United States has successfully blocked from enforcing. Yet, Secretary of State Hillary Clinton insists that it is the Russians and Chinese who have “neutered” the Security Council in its ability to defend basic human rights. 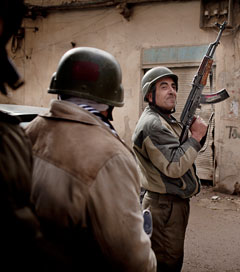 Syrian soldiers secure the area during the visit of Arab League observers on the outskirts of Damascus, Syria, January 26, 2012. (Photo: Tomas Munita / The New York Times)

What draft resolutions by the United Nation Security Council did the United States find so terrible that both Democratic and Republican administrations felt compelled to veto? Just to give a few examples:

In virtually every one of these resolutions, the United States cast the sole negative vote in the otherwise-unanimous 15-member Security Council. And some of the resolutions vetoed by the United States involved governments responsible for even more civilian deaths than the Syrian regime in its bloody yearlong crackdown.

None of this justifies the Soviet-Chinese veto of the resolution challenging the Syrian regime’s repression, of course. It does, however, make the self-righteous condemnation of this most recent veto by the very supporters of many of these earlier US vetoes look rather ridiculous in the eyes of those who support human rights and international law regardless of the offending regime’s geopolitical alliances.