The day after the Charlottesville City Council passed a resolution calling on the federal government to end all its wars and avoid starting a new one with Iran, the move has drawn attention from abroad.

One arm of Iran’s state-owned media, PressTV, is reporting the council’s latest foray into foreign policy through an interview with David Swanson, the Charlottesville peace activist who helped push the resolution.

“We think it was the first city in the United Sates to officially pass a resolution urging the Congress and the President of the United States not to engage in any military actions against Iran,” Swanson told the Iranian outlet in an audio interview. “The same resolution urged the ending of all current wars, ground wars and drone wars, and the significant cutting back of military spending in the United States in order to redirect that money to human needs, both at home and abroad.”

Later in the interview, he said: “We certainly hope that it helps, and we hope that people in Iran as well as in the rest of the world hear the news and understand that many of us do not want a war.”

The Iranian news site, which describes itself as “bringing to light untold and overlooked stories of individuals who have experienced the vitality and versatility of political and cultural divides firsthand,” ran the item with the headline “‘Charlottesville votes for resolution against Iran attack.’”

According to Swanson, PressTV frequently contacts him for interviews, which he sometimes grants.

Swanson said in a Wednesday interview with the Daily Progress that the resolution has generated a lot of positive reaction.

“I say to Iranian or Russian or French or any other [media] the exact same thing I would say to a U.S media outlet,” Swanson said.

He pointed to a propaganda technique sometimes used against those opposed to wars that claims they are for the enemy. He is not for the enemy, but simply against war, he said. 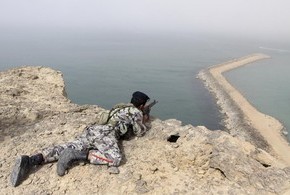 Credit: Associated Press. An Iranian soldier looks out over the Gulf of Oman. Tensions between Washington and Tehran have risen sharply in recent months.

“We have drones in their skies, we have terrorists on their streets,” he said, referring to activities including cross-border raids from Iraq and support for dissident groups.

He acknowledged that some — particularly anonymous commenters on the Internet — have expressed offense at the resolution.

“Now, not only do we not get a public vote, not only do our representatives in Congress not get a vote anymore [on whether to go to war], but we aren’t supposed to speak, we’re supposed to put tape over our mouth,” he said.” The logic seems to apply to individuals and the City Council.”

John Pfaltz, a Republican city council candidate in 2000 and current city resident, was quoted as critical of the inclusion of the language about Iran before the resolutions passage. At that time he called a measure that would do little harm and little good.

The only council member to abstain from voting on the resolution, which passed 4 votes to 0, was Kathy Galvin.

“I could not go ahead and fully support the resolution, but I didn’t vote no because I do believe in the concept,” she said Wednesday. “It was a good message, I just didn’t think the details were appropriate.”

Swanson said activists have long been combating the specter of war with Iran through methods including rallying and writing members of congress.

“When we do it through a city council, it’s doing the same thing but with a larger microphone,” he said. “And how much good it does will always remain to be seen, but … if other towns and cities and organizations follow suit, it could have a tremendous impact. There is still such a thing as popular will influencing the government.”

When activists succeed in preventing wars from even starting, they’ve no way of knowing, Swanson said.

“We have been preventing this war,” Swanson said. “And if we prevent it we’ll be told, well, it was never going to happen anyway, or we just won’t be told, because it won’t be news.”