The Pentagon allegedly endangered U.S. soldiers by implementing and covering-up dangerously toxic waste-incineration practices at Balad Airbase in Iraq during years past, as revealed in a leaked Air Force memo [PDF]. Raw Story, which first reported the leak, writes this:

The document, written by an environmental engineering flight commander in December of 2006 and posted on Wikileaks on Tuesday, details the risks posed to US troops in Iraq by burning garbage at a US airbase. It enumerates myriad risks posed by the practice and identifies various carcinogens released by incinerating waste in open-air pits. 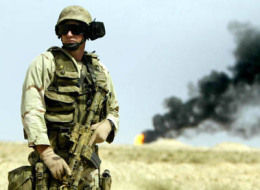 According to the document, a US Army Center for Health Promotion and Preventative Medicine investigator said Balad’s burn pit was “the worst environmental site I have ever personally visited,” including “10 years working …  clean-up for the Army.”

Last December, Army Times reported on the rise of symptoms among soldiers in Iraq and Afghanistan who had suffered direct exposure to burn pits:

The story then goes on to discuss a Pentagon report titled “Just the Facts” which, given the now-leaked memo, reeks of obfuscation. According to Army Times, “Just the Facts” admits the “occasional presence” of possibly harmful toxins but then attempts to write-off the cancerous Balad Airbase miasma as harmless:

But “the potential short- and long-term risks were estimated to be low due to the infrequent detections of these chemicals,” the paper states. “Based on U.S. Environmental Protection Agency guidance, long-term health effects are not expected to occur from breathing the smoke” at Joint Base Balad.

In my professional opinion, there is an acute health hazard for individuals. There is also the possibility for chronic health hazards associated with the smoke; thus the information is being made a permanent part of each Airman’s medical record. I base this assessment on the data that I have reviewed and on-site smoke plume assessments (boots on the ground).