Occupy vs. Monsanto: Activists, Farmers Fight the Corporation They Fear Will Take Over All America’s Crops

Occupy comes out to support a lawsuit that hopes to turn the tables on corporate farming behemoth Monsanto.

Monsanto, if you will, is the 1 percent of Big Agriculture–the scourge of small farmers everywhere. But now those farmers are fighting back, backed by activists from Occupy Wall Street. 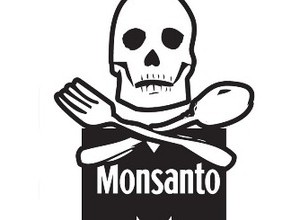 First, some history. In 1982, Monsanto scientists were the first to genetically modify a plant cell. Three years later, the US Patent Office ruled that plants were a patentable subject matter.

By 1985, Monsanto had already become a corporate giant by creating RoundUp, the most popular herbicide in the world. Now that it had the legal protection of seed patents in addition to the biotechnology to genetically manipulate its seeds, Monsanto scientists engineered a specific brand of Monsanto seeds that were RoundUp-resistant—unlike organic, natural seeds, these seeds are sterile and have to be re-planted each year, ensuring that customers return year after year to replenish their supply.

In order to achieve a monopoly over the market, and keep farmers from saving their own seed as they have done for centuries, Monsanto begin to purchase as many seeds as possible—spending $8 billion and acquiring over 20 seed companies over the past decade alone. Today, Monsanto controls 93 percent of soybean crops, 86 percent of corn crops, 93 percent of cotton crops, and 93 percent of canola seed crops in the United States alone.

Monsanto is far from finished. To continue its corporate monopoly and push more seeds off the market, Monsanto specifically targets organic farmers, often testing their crops without permission. If the crops are resistant to RoundUp, Monsanto’s signature pesticide, Monsanto sues the farmer for patent infringement.

In many instances, pollen from a neighboring farm growing Monsanto’s genetically modified crops can migrate to an organic farm, contaminating its crops. In addition to losing these crops and losing important organic buyers due to this genetic trespass, many organic farmers face undeserved, crippling lawsuits from Monsanto that force them into debt, bankruptcy, and often out of business entirely.

“Family scale farmers are the most in danger; all of us are hanging on by our fingertips,” Jim Gerritsen, an organic potato farmer from Northern Maine and president of the Organic Seed Growers and Trade Association (OSGATA), told me. “The thought of having to fight off a monster like Monsanto under false charges—and in this country, as wonderful as it is, anybody can sue anybody for anything—having to defend ourselves from a frivolous lawsuit could bankrupt any of us.”

In March 2011, Jim Gerritsen turned the tide, filing a lawsuit on behalf of OSGATA, this time against Monsanto. Since March, 82 other plaintiffs representing over 300,000 organic farmers, seed companies and food associations have joined the case.

“The trajectory from the past fifteen years, which been increasing in recent years, is that organic farmers will be forced out of business because the extended contamination will become so extensive because of its increasing acreage,” Gerritsen said when I asked what inspired him to file a lawsuit. “So either we stand up and fight now, or we’re going to lose our options.”

This past Tuesday, Gerritsen and over 50 plaintiff representatives came to New York City from across North America as Public Patent Foundation lawyer Dan Ravicher presented their case to Judge Naomi Buchwald at the Manhattan Federal District Court.

Outside the courthouse in Folely Square, over 200 activists, organized by the Occupy Wall Street Food Justice working group, waited to meet and welcome the plaintiffs when they emerged from the courthouse. “We want to show farmers who are coming in from around the country that people in cities care about these issues. We want to stand in solidarity and connect rural and urban issues,” said Corbin Laedlein, an organizer with the group.

During the hearing, farmers and food activists who had come in solidarity with the plaintiffs discussed the case and the fight against genetically modified foods over the human microphone.

During the hearing, farmers and food activists who had come in solidarity with the plaintiffs discussed the case and the fight against genetically modified foods over the human microphone.

Many proponents of genetically modified foods claim that GM foods are the only way to produce high enough yields to feed the world’s growing population. However, several studies prove there is no difference between the yield of a GM crop and that of an organic crop. In fact, through minimizing costs by reducing labor to maximize profit and production, GM crops have less oversight and much higher rates of mass contamination and food recalls.

“Farming is a way of reclaiming our identity to combat a system that has nothing to do with the well being of the people,” continued Faust, as the crowd echoed back his words.

If Monsanto ever reached a point that it had a complete monopoly over the seed industry, organic food, farms and farmers would no longer exist. All previously natural foods would be genetically modified, meaning that the original source of all food would be in a laboratory, rather than in nature. Consumers would have no choice as to whether or not they want to expose themselves and their children to foods created through biotechnology.

“The seed is the foundation of civilization and of democracy,” David Murphy of Food Democracy Now, one of the plaintiffs in the case, told me later. “If Monsanto continues its monopoly, every citizen in the United States and on the planet could lose their basic right to have food grown in the way in which they choose.” 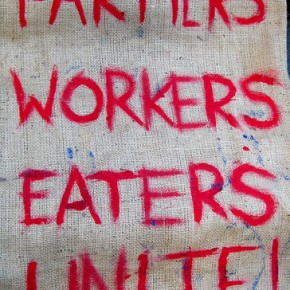 In places like Iowa, where David Murphy is from, genetically modified crops, and their pollen, are inescapable. The Great Plains are covered with corn and soybean fields, and with Monsanto owning 88 percent of all corn seed and 93 percent of all soybean seed, any organic farmer in their immediate vicinity runs an enormous risk of genetic contamination and lawsuits. If Monsanto continues its practices unchecked, this could be one of the first places where both the organic crop and the organic farmer become extinct.

“The reality is, organic farmers want absolutely nothing to do with Monsanto,” Gerritsen told me. “We don’t want their seed, we don’t want their trespass and contamination, and we certainly do not want a lawsuit when we have done nothing wrong and are innocent victims.”

On March 5th, the Manhattan Federal District Court will announce its decision to go forward or to dismiss the case. Regardless of Judge Buchwald’s decision, OSGATA and the plaintiffs plan to continue their legal battle against Monsanto. 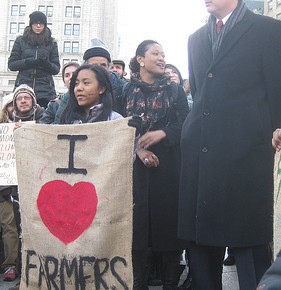