Say No to War

Never a Nazi supporter, he deplored compulsory Hitler Youth time. Finally he got out. In 1940, the Gestapo arrested, then released him. His Wehrmacht conscription suspended his young theatrical career.

Sent to the Eastern front, he saw war firsthand at its worst. It included numerous casualties, vast destruction, starvation, and painful deaths. When an infected cut caused hepatitis, he was accused of avoiding military service by self-mutilation. As a result, he was arrested, placed in isolation, convicted of making “statements endangering the country,” sentenced to six more weeks in isolation, then returned to the Eastern front “to prove himself” in battle. 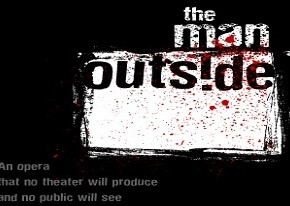 As a result, he suffered frostbite and hepatitis bouts. Given medical leave to recover, he returned home to ravaged Hamburg. He parodied Nazi propaganda minister Joseph Gobbels. Doing so got him prosecuted and sentenced to nine months in prison.

On release, he returned to duty on the Western front. In March 1945, his company surrendered. During transfer to a POW camp, he evaded guards, escaped, and walked home to Hamburg, covering about 600 km.

After the war, his health deteriorated. In 1946, doctors gave him a year to live. His damaged liver couldn’t last longer. With life slowing ebbing, he resumed theater work and writing.

He wrote short prose and poems, compiled in a collection called Laterne, Nacht and Sterne (Lantern, Night and Stars). In late 1946 or early 1947, he wrote “The Man Outside.”

Performed on radio in February 1947, it won significant acclaim. It included a dozen short stories and one play. Combining polemic and sentimentality, it raged in elegiac pieces like “The Bread” and “The Rats Sleep at Night.”

Marriages threaten to unravel over trivial incidents. Prisoners risk life and limb to glimpse flowers. In addition, a narrator alternates between sympathy and rage about how things are. This is what we did, all of us, he said. Ideological framing’s gone. Years of war destroyed it. There’s just the here and now to start over, rebuilding from bubble and broken lives.

It recounts a post-war soldier’s hopelessness. He returns home to find his wife and home lost, his beliefs and illusions shattered. All doors are closed. Even the Elbe River rejects his suicide, washing him ashore. The play ends with the lead character’s death. He may have recounted his own before he passed.

He subtitled his work “A play that no theater wants to perform and no audience wants to see.” Its too grim to bear.

His poem titled, “Say NO” was written days before he died. Its searing rhetoric cuts deep. He said:

“You. Man at the machine gun and man in the workshop. If tomorrow they tell you you are to make no more water-pipes and saucepans but are to make steel helmets and machine-guns, then there’s only one thing to do:

You. Woman at the counter and woman in the office. If tomorrow they tell you to fill shells and assemble telescopic sights for snipers’ rifles, then there’s only one thing to do:

You. Research worker in the laboratory. If tomorrow they tell you you are to invent a new death for the old life, then there’s only one thing to do:

You. Priest in the pulpit. If tomorrow they tell you you are to bless murder and declare war holy, then there’s only one thing to do:

You. Pilot in your aeroplane. If tomorrow they tell you you are to carry bombs over cities, then there’s only one thing to do:

You. Man of the village and man of the town. If tomorrow they come and give you your call-up papers, then there’s only one thing to do:

You. Mother in Normandy and mother in the Ukraine, mother in Vancouver and in London, you on the Hwangho and on the Mississippi, you in Naples and Hamburg and Cairo and Oslo – mothers in all parts of the earth, mothers of the world, if tomorrow they tell you you are to bear new soldiers for new battles, then there’s only one thing to do:

In the bustling hazy harbour towns the big ships will fall silent as corpses against the dead deserted quay walls, their once shimmering bodies overgrown with seaweed and barnacles, smelling of graveyards and rotten fish.

The trams will lie like senseless glass-eyed cages beside the twisted steel skeleton of wires and track.

The sunny juice vine will not rot on decaying hillsides, rice will dry in the withered earth, potatoes will freeze in the unploughed land and cows will stick their death-still legs into the air like overturned chairs.

In the fields beside rusted ploughs the corn will be flattened like a beaten army.

Then the last human creature, with mangled entrails and infected lungs, will wander around, unanswered and lonely, under the poisonous glowing sun, among the immense mass graves and devastated cities.

The last human creature, withered, mad, cursing, accusing – and the terrible accusation: Why?

will dies unheard on the plains, drift through the ruins, seep into the rubble of churches, fall into pools of blood, unheard, unanswered,

the last animal scream of the last human animal –

All this will happen tomorrow, tomorrow, perhaps, perhaps even tonight, perhaps tonight, if – if –

Anyone unmoved by that isn’t human. No one could write it who didn’t experience war’s horrors firsthand, and scream Say NO! Say NO! No More.

Written almost 65 years ago, wars rage daily. Millions more lives expired. Perhaps no one will listen to other Borcherts until no one’s left to hear, if “You do not say NO” now.