On Torture: The American Malaise

BBC London: “Former US President George W Bush was “fully informed” about CIA interrogation techniques condemned in a Senate report, his vice-president says. Speaking to Fox News Dick Cheney said Mr Bush “knew everything he needed to know” about the programme, and the report was, “full of crap”. Well he would, wouldn’t he! When combined to hubris there are no limits to  ‘known unknown knowns’. 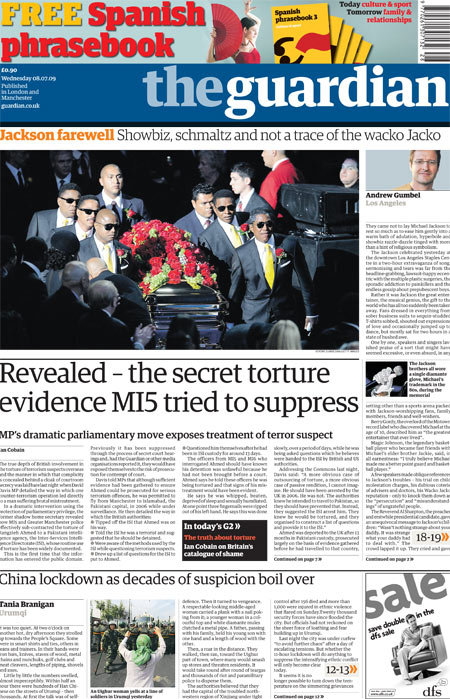 Damningly, once more, Britain was complicit and in ‘the corridors of power’ the talk of requests by the UK intelligence agencies for ‘deletions’ of Britain’s complicity was shared by the UK newspaper The Guardian: “References to Britain’s intelligence agencies were deleted at their request from the damning US report on the CIA’s use of torture after 9/11, it has emerged.” Let’s not look for any moral ascendency here either.

Further, “A spokesman for David Cameron acknowledged the UK had been granted deletions in advance of the publication, contrasting with earlier assertions by No 10. Downing Street said any redactions were only requested on “national security” grounds and contained nothing to suggest UK agencies had participated in torture or rendition”. Unsurprisingly “The admission will fuel suspicions that the report – while heavily critical of the CIA – was effectively sanitised to conceal the way in which close allies of the US became involved in the global kidnap and torture programme that was mounted after the al-Qaida attacks.” (The Guardian) Another UK newspaper goes further by naming an inmate: “Yesterday’s revelation by The Independent that MI5 was passed intelligence that had allegedly been tortured out of former Guantanamo inmate Moazzam Begg by his American interrogators – and the acknowledgement by former security minister Lord West that UK agents may have been present during water-boarding – expose the truth about British complicity in torture.” 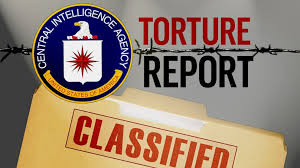 Why CIA Interrogators Unlikely to Be Prosecuted For Torture – ABC News abcnews.go.com

After the Senate Committee on Intelligence CIA 6000 page report concerning the unlawful techniques of torture used to brutalise suspects at Guantanamo Bay and other secret locations the return to the understanding of clearly stated resolutions and covenants is of vital importance. The scale of state organised violence has shocked the so-called thinking world. America’s greatest intellectual and tireless ethical constructor for future generations of a moral code Noam Chomsky wrote an article in ‘News’ on May 20th 2009 ( time is not important here for I write later of principles even though 2009 looms large) Chomsky on Torture. What is clear the programme was instigated under Bush Junior and wilfully ignored by Obama: both are culpable and have been sanctioning illegal acts. We have historical precedents. Torture has been seen by successive U.S administrations as a natural extension of American covert interference in and with other countries’ sovereignty.

Even the U.S police in 1910 used “psychological duress such as prolonged confinement to extreme violence and torture … widespread and considered acceptable in early American policing.” Today the Americans see themselves as the world’s policing force and so the policing techniques clearly continue. Also today during peaceful demonstrations violence has been used inappropriately and as policy by the police in America (for instance police violence meted out to the Occupy Movement protestors, the recent shootings in Ferguson: the acme).
The U.S, undertaking in-depth training in Israel, has and is training in torture techniques in virtually all countries of the world. This has destroyed many, many lives, so American Israeli fascism has been increasingly exposed: “The Torture Manuals was a nickname for seven training manuals that had excerpts declassified to the public on September 20, 1996, by the Pentagon.” Historically significant, “One was the 1963 CIA document, Kubark Counterintelligence interrogations which describes interrogation techniques, including, among other things, “coercive counterintelligence interrogation of resistant sources.” The CIA techniques involved were used in the CIA’s Phoenix Programme in South Vietnam. Eventually the CIA’s psychological methods were spread worldwide through the U.S Agency for International Development Program and U.S. Army mobile training teams the manuals were prepared by the U.S. military and used between 1987 and 1991 for intelligence training courses at the U.S. Army School of the Americas (SOA). The manuals were also distributed by Special Forces Mobile Training teams to military personnel and intelligence schools in Colombia, Ecuador, El Salvador, Guatemala, and Peru.” (Wikipedia)
All this criminal suffering has been recognised to divulge “unreliable evidence” clearly a person under extreme stress ‘mostly’ will say anything to stop the pain.

Nothing Can Justify Torture: Chomsky By Eric Bailey www.countercurrents.org

“Over the past sixty years, victims worldwide have endured the CIA’s “torture paradigm,” developed at a cost that reached $1 billion annually, according to historian Alfred McCoy in his book A Question of Torture. He shows how torture methods the CIA developed from the 1950s surfaced with little change in the infamous photos at Iraq’s Abu Ghraib prison. There is no hyperbole in the title of Jennifer Harbury’s penetrating study of the US torture record: Truth, Torture, and the American Way. So it is highly misleading, to say the least, when investigators of the Bush gang’s descent into the global sewers that “in waging the war against terrorism, America had lost its way.”

None of this is to say that Bush-Cheney-Rumsfeld et al. did not introduce important innovations. In ordinary American practice, torture was largely farmed out to subsidiaries, not carried out by Americans directly in their own government-established torture chambers. As Allan Naim who has carried out some of the most revealing and courageous investigations of torture, points out: “What the Obama [ban on torture] ostensibly knocks off is that small percentage of torture now done by Americans while retaining the overwhelming bulk of the system’s torture, which is done by foreigners under US patronage. Obama could stop backing foreign forces that torture, but he has chosen not to do so.” (Chomsky)

This barbaric criminality, a crime against humanity, instigated by the Bush Junior administration and this Bush created sewer keeps flowing through the American Constitution accepted or ignored by Obama.

The UK Times December 10 2014 under Leading Articles wrote: (well quoted) more correctly, “Did we torture people? Yes. Did it work? No.” The Times comments: “That is the verdict of Senator Angus King on the CIA rendition and torture programme in the years after 9/11.

According to the UK The Guardian, Wed 10 December 2014 under U.S news: The operation was murky from the beginning “The CIA began the establishment of a specialised detention centre, codenamed DETENTION SITE COBALT, in April 2002. Although its location is not identified in the report it has been widely identified as being in Afghanistan. Conditions at the site were described in the report as poor “and were especially bleak early in the program”. Additionally, “The CIA chief of interrogations described COBALT as “a dungeon”. There were 20 cells, with blacked-out windows. Detainees were “kept in complete darkness and constantly shackled in isolated cells with loud music and only a bucket to use for human waste”. It was cold, something the report says likely contributed to the death of a detainee. “ Adding “Prisoners were walked around naked or were shackled with their hands above their heads for extended periods of time. About five CIA officers would engage in what is described as a “rough takedown”. A detainee would be shouted at, have his clothes cut off, be secured with tape, hooded and dragged up and down a long corridor while being slapped and punched.” Moreover, “operatives subjected at least five detainees to what they called “rectal rehydration and feeding.” Finally, “Rectal feeding is of limited application in actually keeping a person alive or administering nutrients, since the colon and rectum cannot absorb much besides salt, glucose and a few minerals and vitamins. The CIA administered rectal rehydration to Khalid Sheikh Mohammed “without a determination of medical need” and justified “rectal fluid resuscitation” of Abu Zubaydah because he “partially refused liquids”. Al-Nashiri was given an enema after a brief hunger strike.” Suspects, all men, were fighting for their dignity and were brave; the upshot of such criminal abuse was that all suffered severe health problems. “Risks of rectal feeding and rehydration include damage to the rectum and colon, triggering bowels to empty, food rotting inside the recipient’s digestive tract, and an inflamed or prolapsed rectum from carless insertion of the feeding tube. The report found that CIA leadership was notified that rectal exams may have been conducted with “Excessive force”, and that one of the detainees, Mustafa al-Hawsawi, suffered from an anal fissure, chronic haemorrhoids and symptomatic rectal prolapsed.” (The Guardian)

Examining Britain and the “aggressive war” conducted against Iraq according to antiwar expert Chris Coverdale: “in 2001 parliament enacted the International Criminal Court Act making it a criminal offence for residents to engage in genocide, crimes against humanity, war crimes or conduct ancillary to such crimes.” The “Iraq Inquiry, published evidence showing that the war with Iraq was illegal. The same rationale of illegality and criminality [applied] to the … wars in Afghanistan, Syria and Pakistan.” (Chris Coverdale) Alleged then we now know torture was used regularly.

This enshrined international norm is unequivocal: “Torture in all forms is banned by the 1948 Universal Declaration of Human Rights (UDHR) which the United States participated in drafting. The United States is a party to the following conventions (international treaties) that prohibit torture: the American Convention on Human Rights (signed 1977) and the International Covenant on Civil and Political Rights (signed 1977; ratified 1992). It has neither signed nor ratified the Inter-American Convention to Prevent and Punish Torture. International law defines torture during an armed conflict as a war crime. It also mandates that any person involved in ordering, allowing and even insufficiently preventing and prosecuting war crimes is criminally liable under the command responsibility doctrine.

It is recognised that torture only inflames the mainly Muslim world and increases resentment against the West especially the United States of America -even if the Head of State acted/ordered a criminal act, in this case torture as Head of State or Government, this does not relieve him/her of criminal responsibility or mitigate punishment. I submit therefore and thereof that former President George W. Bush and current President Barack Hussein Obama are war criminals and are directly responsible through the institution of the Presidency of the United States of America for some of the worst war crimes of the 21st century. Namely the torture of suspects subjected to some of the worst forms of torture known to the so called ‘free world’. That likes to think itself civilised.