An investigation was also launched into the incident, which took place in Geyawa village in the Nejrab district of Kapisa province on Wednesday, the statement said.
President Karzai 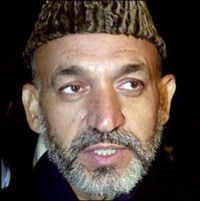 has assigned a delegation led by advisor Haji Mohammad Zaher Safi and a number of lawmakers and representatives from various Afghan ministries to launch “an all-out probe into the NATO bombing,” the statement said.

“President Karzai contacted the provincial governor and inquired more on the incident and telephoned the mourning families and expressed his deepest sympathies and condolences,” the statement said.

Civilian casualties due to NATO airstrikes have been a serious issue of contention between the Afghan president and his western military allies.

Meanwhile, Karzai extended the deadline for handover of the US-run Bagram prison to Afghan control by a month.

Last month, Karzai said that the United States should hand over control of the prison to Afghan authorities within a month, after a scathing report by an Afghan commission cited “many cases of violations of (the) Afghan Constitution and other applicable laws of the country, the relevant international conventions and human rights.”

Close to 600 inmates have been either released or transferred to Afghan authorities, a palace statement said. “However, the handover of the control of the prison is yet to take place,” it said.

Mark Thornburg, a US embassy spokesman, said the United States was willing to work with the Afghan government on the transition of authority. But he did not confirm if control would be handed over in another month.

Hundreds of Taliban insurgents are incarcerated in Bagram prison. Human rights organizations and some former detainees have said that some of the prisoners are ill-treated and some kept in solitary confinement.

Observers say Karzai wants control over the prison in order to gain a better negotiating position with the Taliban.