A Fitting Symbol of the American Empire

The image of four U.S. marines urinating on the corpses of Afghan fighters is a fitting symbol of American intervention in Central Asia and the Middle East. That picture will live forever in the memories of people in the region, along with the pictures from Iraq’s Abu Ghraib prison.

Most Americans aren’t much interested in making fine distinctions in foreign affairs. As Republican presidential contender Ron Paul points out, the Taliban (U.S. allies against the Soviets) never wished the American people harm. What they oppose is a foreign presence in their country, Russian or American, and they have no desire to attack anyone who stays home and minds his own business.

Other than Paul, the Republican candidates see the desecration of dead foreigners as an issue with which to score points on President Obama. The candidates and their supporters sympathize with the marines. After all, they say, the Taliban kill Americans. They are the enemy. They all should be killed.

This may be fodder for demagogues, but it’s plain nonsense. The Taliban are the home team. The American forces are the visitors — invaders and occupiers, to be precise. As Ron Paul likes to ask, how would Americans feel if there were an occupying army in the United States propping up a corrupt government? Would they turn militant? Would they mount an insurgency? I think we can predict they would.

Therefore, American belligerence toward Afghans who resent the presence of foreign occupiers is unjustified. That resentment is not anti-American, because behind it lies no wish to harm our society. When will the American people learn that? 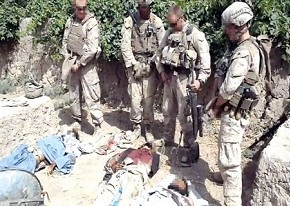 In his comments at the first South Carolina debate, Paul distinguished the Taliban from al-Qaeda, which took responsibility for the criminal attacks on 9/11. Apparently, to most Americans, “they” are all the same. But the distinction makes a difference. Al-Qaeda was largely made up of men from various Arab nations, not Afghans.

In the 1990s, the Taliban leadership allowed Osama bin Laden and other members of al-Qaeda to live in Afghanistan. Does that implicate the Taliban in 9/11? In pondering this question, it’s helpful to realize that after the attacks, the Taliban leadership offered to turn bin Laden over to the U.S. government if given evidence of his guilt. The U.S. government refused. Maybe the Taliban leadership was bluffing, but we will never know what would have happened had they been tested. (This was one of many counterproductive moves committed by President George W. Bush. Iran’s offer to cooperate after 9/11, before Mahmoud Ahmadinejad was elected president, was similarly rejected.)

This is not to defend the Taliban regime. After the Soviets were beaten, it ran a brutal theocracy that engaged in inexcusable destruction. But two things should be kept in mind. Most people fighting the U.S. occupation today had nothing to do with the regime, al-Qaeda, or 9/11. And it’s been reported that most Afghans know nothing about 9/11. All they know is that armed foreigners stalk their land, bursting into their homes in the night and dropping bombs from the sky. Some of the resisters may well believe the occupiers are Russians.

Unfortunately, the Republican primary process is anything but conducive to a careful discussion of U.S. foreign policy. Except for Paul, the candidates see maximum advantage in sounding tough, no matter how irrational their claims and proposals are. So we saw Rick Perry (now gone from the race) condemn the leadership of Turkey as “Islamic terrorists” and Mitt Romney reject any diplomatic contact with the Taliban because “These people have declared war on us. They’ve killed Americans. We go anywhere they are and we kill them.”

But, as noted, the Taliban have not declared war on the United States, and when they kill Americans, they are killing invaders and occupiers. Does Romney realize that U.S. forces are in their country?

Here’s the irony: The attacks on 9/11, as Ron Paul has explained many times, are comprehensible (though not justifiable) only as “blowback” from long years of violent U.S. intervention in the Arab world. Intervention creates enemies bent on vengeance, something the U.S. military leadership itself acknowledges.

Sheldon Richman is senior fellow at The Future of Freedom Foundation (www.fff.org) and editor of The Freeman magazine.