A humanitarian question was to be raised by Herzel, a concern the Apostolic Holy See must surely address by not opposing Jewish immigration into historical Palestine. Herzel had wanted to “avoid the religious issues” concentrating on the acute distress of the Jews, an impossibility of course when sitting next to a Roman Catholic Pope theologically shackled. Pope Pius X was an assailant of modernism.  A modernism (as we read from his Encyclical of September 8, 1907)  espousing  “profane novelties of words and the gainsaying of knowledge falsely so called.” He would brook no reform of the church “guarding with the greatest vigilance the deposit of the faith.” This Vatican rationalization remaining also an anathema to the truth of the  monotheistic faith of Islam that regards Jesus (with loving reverence) as a prophet, encouraging others of the monotheistic faiths with Abrahamic Middle Eastern origins to return to Allah/God  “the merciful” the “All-powerful.”

Herzel a “self proclaimed atheist” who believed  “Antagonism is essential to man’s greatest efforts,” enquired antagonistically of the Pope  “Terror and persecution may not have been the right means for enlightening the Jews.”  The Pope’s rejoinder “He [Christ] was abbandonato [forsaken] even by his apostles. Only later did he grow in stature. It took three centuries for the Church to evolve. The Jews therefore had time to acknowledge his divinity without any pressure. But they haven’t done so to this day.”

This theological appropriation by the Roman Catholic Church of Christ, Palestine and Jerusalem was in exclusion of a virtuous mercy and compassion shown toward persecuted Jews. Around 170,000 Jews were to flee Russian pogroms between 1881-1914 discouraged by Britain and USA anti-Semitism, which extended into the shadows of World War II through Pope Pius XII’s impartiality. This Vatican spiritual petit mal, “The Jews have not recognized our Lord, therefore we cannot recognize the Jewish people” (Pope Pius X), was to be exceeded by the later Zionist expropriation of Historical Palestine and spiritual grand mal, “When we have settled the land, all the Arabs will be able to do about it will be to scurry around like drugged cockroaches in a bottle.” (Raphael Eitan, IDF Chief of Staff, 1983) as demonstrated by Israel’s conscious and meticulously planned persecution of Palestinians since 1948.

In his Encyclical: On Prayers For Peace In Palestine October 24, 1948, as one of the worst crimes against humanity had begun in historical Palestine, Pope Pius XIII “without abandoning the attitude of impartiality” comments “men continue to fight and to increase the distress of the unfortunate and the fear of the terrorized, while thousands of refugees, homeless and driven, wander from their fatherland in search of shelter and food.” They wander still as conscience and morality stall. The Vatican desiderata to protect the holy sites placed above moral concerns to protect the Palestinians.

Decades on, Pope John XXIII Encyclical 11 April 1963 Pacem in terris (Peace on Earth) recognized that with nuclear proliferation Palestine could be incinerated along with the rest of the world,  “unless the order which God laid down is dutifully observed,” and was addressed (universally) “to all men of good will.” This paved the way for the vital Second Vatican Council, Lumen Gentium 16, November 21, 1964 which by recalling  conscience, stated “ the plan of salvation also includes those who acknowledge the Creator, in the first place among whom are the Muslims: these profess to hold the faith of Abraham, and together with us they adore the one, merciful God, mankind’s judge on the last day.” And the Second Vatican Council, Nostra Aetate 3, October 28, 1965 acknowledged “The Catholic Church rejects nothing of what is true and holy in these religions. She has a high regard for the manner of life and conduct, the precepts and doctrines which, although differing in many ways from her own teaching, nevertheless often reflect a ray of that truth which enlightens all men.” That truth enlightens Pope Francis. The white cassock and zucchetto made of watered silk sit well on Pope Francis, Jorge Mario Bergoglio as the 266th (and first Jesuit) Pope, with the titles ex officio  Bishop of Rome, and Vatican City Sovereign, is evolving a right minded yet (for some) contentious Catholic universalism: taking in Muslims, washing their feet, chastising world leaders, meeting with Patriarch of Constantinople Bartholomeous in Jerusalem in 2014,  referring to Mahmoud Abbas as President of the State of Palestine May 13, 2015 (Two-Way) and canonising on 17 May 2015 two Arab Palestinian nuns Marie Alphonsine Ghattas (Jerusalem born) and Mariam Bawardy (born in I’billin, Galilean village). 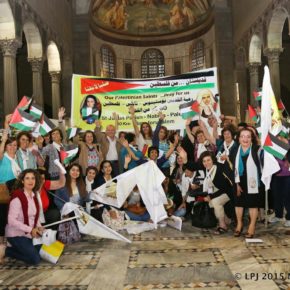 It is right to respect  belief, to wonder at faith,  if that belief and faith be practised according to love, reason, and reasonableness, so that then such sacred practice should be protected as to places of worship and pilgrimage in Palestine-Jerusalem and as to the feet of the faithful that tarry not, but hurry there. This holds true for the Muslim faith, other Christian faiths, orthodoxies (“in correct opinion”) Judaism. And In context of the centrality of Monotheism, to cleave to Yahweh/ God/Allah in “Naked Understanding” in “communion” “seeking refuge” and for all three  Abrahamic faiths to be able to worship unmolested, uninhibited, in a whole, healed, Jerusalem: “Abode of Peace.”