Unequal Protection: How Corporations Became “People” – and How You Can Fight Back

If you believe that corporations should not have the same rights as people – if you are appalled by the 2010 Citizens United decision – then this is the book for you.

Thom Hartmann wrote this prescient book, now updated, about the threat posed to democracy by granting corporations the rights enjoyed by citizens of the United States. With extensive research and a sense for the nuances of legal history, Hartmann skillfully traces how big business legally bullied its way into receiving rights reserved in the Constitution for humans, not institutions. 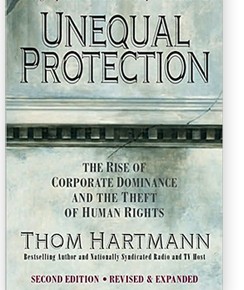 Although many Americans were astonished by the outcome of the Citizens United decision, Hartmann saw it coming years ago. “Unequal Protection” remains the best and, actually, the only book devoted to the theft of human rights by corporations in the United States. The catastrophic consequences of granting multinational companies the same legal recourses and protections that we won in the American Constitution is a major contributor to the economic and political injustice that exists today.

In the battle of democracy against corporate governance, “Unequal Protection” is a must-read backgrounder, filled with insights and knowledge rarely seen in the mainstream media.