Occupy Takes Aim at ALEC Today in 70 US Cities

The Occupy movement, since its inception in September 2011, has been against corporate greed. And in 70 cities across the country, it’s found one target that best shows the rampant corporate control of our judicial system that Occupiers see as a central grievance: the American Legislative Exchange Council (ALEC).

ALEC brings legislators and corporations together in a “public-private partnership” to draft model legislation that Occupy groups say serves the interests of the 1 percent.

Today, legislators and companies including Pfizer, Bank of America and Wal-Mart, that benefit from ALEC’s power in the legislative system will be the target of demonstrations, direct actions and various public shows of anger across the country under the banner of Shut Down the Corporations.

“The public is never informed that a group representing the most privileged people in America are drafting the legislation that disempowers the most vulnerable,” said David Osborn with Occupy Portland. “The decisions affecting our communities should be made democratically, not through a corrupt system that hides the influence of the very corporations that benefit at our expense. ALEC is representative of a failed system in which profit and greed are dominant over everything else.” 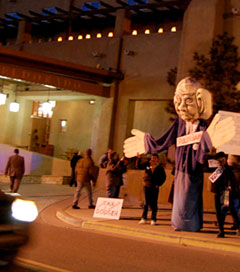 Protesters, supported by Occupy Santa Fe, demonstrate against ALEC and the influence of money in politics outside the Eldorado Valley Hotel, January 25, 2012. (Photo: suenosdeuomi)

The protest was called by Occupy Portland and is expected to be the Occupy movement’s biggest coordinated action this year.

What this will look like isn’t clear, as different groups are being encouraged to target corporations in their own ways, Osborn told The Guardian UK.

“In some places it’s going to be more of a rally, or a protest outside a corporation that’s involved with ALEC, whether that’s Bank of America, or Pfizer, Altria, or whatever,” said Osborn. “In other places, and certainly here in Portland, it’s going to take more of the form of civil disobedience or direct action, where people will be doing a sit-in or other creative things to disrupt business as usual.”

One of the most widely known examples of ALEC-drafted legislation is Arizona’s punitive immigration bill, SB1070. By giving police increased authority to detain anyone suspected of being an undocumented immigrant, the legislation would have been a boon for Arizona’s thriving private prison industry. The bill was eventually partially halted after both the Obama administration and the American Civil Liberties Union (ACLU) brought lawsuits against it.

ALEC can also take credit for Wisconsin’s anti-union bill, which was introduced by Gov. Scott Walker, who was a member of ALEC from 1993-2002. The anti-union bill eventually passed, but not before tens of thousands occupied the state capitol in Madison for weeks and Democratic legislators left the state to keep the bill from going to a vote.

But these two are only the most widely known examples of ALEC in the legislative system. According to its web site, “close to 1,000 bills, based at least in part on ALEC Model Legislation, are introduced in the states,” and “of these, an average of 20 percent become law.”

The Center for Media and Democracy and The Nation leaked more than 800 ALEC bills on the ALEC Exposed site, which details model legislation that aims to disenfranchise low-income voters, oppose donor disclosure limits in campaign finance and push far-reaching anti-union legislation.

Lawmakers in Arizona and Wisconsin are now looking to introduce the ALEC Accountability Act, which would push the group to disclose its donors and register as a lobbying organization.

But until this legislation comes through, Occupy groups around the country plan to continue their use of public pressure to highlight, and remove, the influence of corporate actors like ALEC in the legislative process.