by: Staff, Center for Economic and Policy Research | Op-Ed

Supports a “Competitive Process” That Will Address Pressing Issues

“Everyone should welcome an actual campaign, and a merit-based selection, rather than just the U.S. government choosing a political or Wall Street hack, which until now has been the process for selecting a World Bank president,” Weisbrot said. 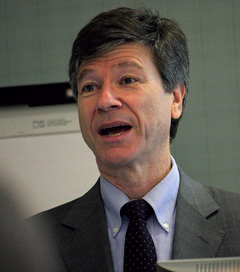 “If Sachs were to get the job, he would be the first World Bank president with this kind of experience and knowledge of economic development – in other words, the first president that would be qualified for the job. All of the others have been bankers, politicians, or political appointees.”

Weisbrot added that “The World Bank is in need of serious reform. I hope this newly competitive process will address the most important issues.”

While the Obama administration has yet to publicly put forward a candidate, Bloomberg reported that the administration’s former Chief Economic Advisor and former World Bank Chief Economist Larry Summers may be under consideration. Over 37,000 people have signed a petition opposing Summers’ possible candidacy due to past comments denigrating women’s intellectual capacity in math and science. Critics of the World Bank’s environmental policies haven’t forgotten an infamous memo Summers wrote while at the World Bank arguing that Africa was “underpolluted.”

Sachs, Weisbrot noted, has made economic development strategies to reduce poverty and inequality a cornerstone of his work, having served as Director of the UN Millennium Project and Special Advisor to UN Secretary-General Kofi Annan on the Millennium Development Goals; and in his current capacity as President and Co-Founder of Millennium Promise Alliance, a nonprofit organization aimed at ending extreme global poverty; and as Director of the Earth Institute at Columbia University.

Weisbrot said that Sachs has the necessary experience to fight for reforms that civil society groups and affected communities have long demanded, such as greater transparency, exemption of primary health and education from budget cuts in low-income countries, greater support for agricultural development and access to essential medicines, and an end to funding of fossil fuel and other environmentally destructive projects.

The Financial Times referred to Sachs’ likely candidacy in an article Wednesday, saying he has “declare[d] his interest in the job.” Sachs published an op-ed this week detailing some of the reforms he wants to see implemented at the World Bank.