US: Number of Aging Prisoners Soaring

(New York) – Aging men and women are the most rapidly growing group in US prisons, and prison officials are hard-pressed to provide them appropriate housing and medical care, Human Rights Watch said in a report released today. Because of their higher rates of illness and impairments, older prisoners incur medical costs that are three to nine times as high as those for younger prisoners.

The 104-page report, “Old Behind Bars: The Aging Prison Population in the United States,” includes new data Human Rights Watch developed from a variety of federal and state sources that document dramatic increases in the number of older US prisoners.

“Prisons were never designed to be geriatric facilities,” said Jamie Fellner, senior adviser to the US Program at Human Rights Watch and author of the report. “Yet US corrections officials now operate old age homes behind bars.”

Long sentences mean that many current prisoners will not leave prison until they become extremely old, if at all. Human Rights Watch found that almost 1 in 10 state prisoners (9.6 percent) is serving a life sentence. An additional 11.2 percent have sentences longer than 20 years. 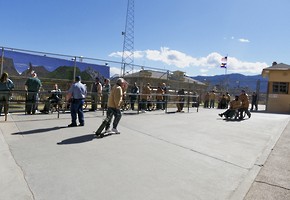 Human Rights Watch visited nine states and 20 prisons to interview prison officials, corrections and gerontology experts, and prisoners. Human Rights Watch found officials scrambling to respond to the needs and vulnerabilities of older prisoners. They are constrained, however, by straitened budgets, prison architecture not designed for common age-related disabilities, limited medical facilities and staff, lack of planning, lack of support from elected officials, and the press of day-to-day operations.

While serving time in prison can be hard for anyone, it is particularly challenging for the growing number of older prisoners who are frail, have mobility, hearing, and vision impairments, and are suffering chronic, disabling, and terminal illnesses or diminishing cognitive capacities, Human Rights Watch said.

Prison facilities, rules, and customs were created with younger inmates in mind, and they can pose special hardships for those who are well on in years. Walking a long distance to the dining hall, climbing up to a top bunk, or standing for count can be virtually impossible for some older prisoners. Incontinence and dementia impose their own burdens. In the prisons with high proportions of elderly prisoners visited for the report, Human Rights Watch found that staff behavior has had to adapt to the realities of aging bodies and minds. 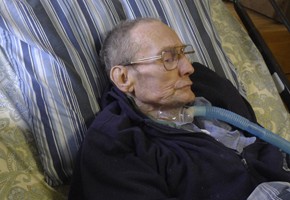 US: Aging Behind Bars

“Prison staff who work with the elderly know it makes no sense to yell at a prisoner who doesn’t understand what they are saying,” Fellner said. “As one sergeant told me, staff have to give older prisoners ‘a little more leeway’ when it comes to enforcing the rules.”

The number of aging prisoners will continue to grow, Human Rights Watch found, unless there are changes to harsh “tough on crime” policies, such as long mandatory minimum sentences, increasing life sentences, and reduced opportunities for parole. Many older prisoners remain incarcerated even though they are too old and infirm to threaten public safety if released, Human Rights Watch said.

“How are justice and public safety served by the continued incarceration of men and women whose bodies and minds have been whittled away by age?” Fellner said.

Among its recommendations, Human Rights Watch urges state and federal officials to:

Fact Sheet for “Old Behind Bars: The Aging Prison Population in the United States”

The Prison Population is Aging