The Assange Case Means That We Are All Suspects Now

WikiLeaks Founder Julian Assange talks to demonstrators while leaving a court appearance for a verdict on an extradition request in London, February 24, 2011.

This week’s Supreme Court hearing in the Julian Assange case has profound meaning for the preservation of basic freedoms in Western democracies. This is Assange’s final appeal against his extradition to Sweden to face allegations of sexual misconduct that were originally dismissed by the chief prosecutor in Stockholm and constitute no crime in Britain.

The consequences, if he loses, lie not in Sweden, but in the shadows cast by America’s descent into totalitarianism. In Sweden, he is at risk of being “temporarily surrendered” to the US where his life has been threatened and where he is accused of “aiding the enemy” with Bradley Manning, the young soldier accused of leaking evidence of US war crimes to WikiLeaks.

The connections between Manning and Assange have been concocted by a secret grand jury in Alexandria, Virginia, which allowed no defense counsel or witnesses, and by a system of plea bargaining that ensures a 90 percent conviction. It is reminiscent of a Soviet show trial. 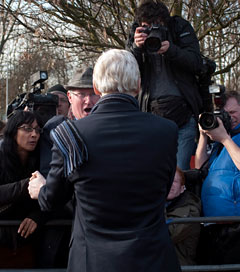 WikiLeaks Founder Julian Assange talks to demonstrators while leaving a court appearance for a verdict on an extradition request in London, February 24, 2011. (Photo: Andrew Testa / The New York Times)

The determination of the Obama administration to crush Assange and the unfettered journalism represented by WikiLeaks is revealed in secret Australian government documents released under freedom of information, which describe the US pursuit of WikiLeaks as “an unprecedented investigation.” It is unprecedented because it subverts the First Amendment of the US constitution that explicitly protects truth-tellers. In 2008, Barack Obama said, “Government whistleblowers are part of a healthy democracy and must be protected from reprisal.” Obama has since prosecuted twice as many whistleblowers as all previous US presidents.

With American courts demanding to see the worldwide accounts of Twitter, Google and Yahoo, the threat to Assange, an Australian, extends to any Internet user anywhere. Washington’s enemy is not “terrorism,” but the principle of free speech and voices of conscience within its militarist state and those journalists brave enough to tell their stories.

“How do you prosecute Julian Assange and not the New York Times?” a former administration official asked Reuters. The threat is well understood by The New York Times, which in 2010 published a selection of the WikiLeaks cables. The editor at the time, Bill Keller, boasted that he had sent the cables to the State Department for vetting. His obeisance extended to his denial that WikiLeaks was a “partner” – which it was – and to personal attacks on Assange. The message to all journalists was clear: do your job as it should be done and you are traitors; do your job as we say you should and you are journalists.

Much of the media’s depiction of Manning illuminates this. The world’s pre-eminent prisoner of conscience, Manning remained true to the Nuremberg principle that every soldier has the right to a “moral choice.” But according to The New York Times, he is weird or mad, a “geek.” In an “exclusive investigation,” The Guardian UK reported him as an “unstable” gay man, who got “out of control” and “wet himself” when he was “picked on.” Psycho hearsay such as this serves to suppress the truth of the outrage Manning felt at the wanton killing in Iraq, his moral heroism and the criminal complicity of his military superiors. “I prefer a painful truth over any blissful fantasy,” he reportedly said.

The treatment handed out to Assange is well documented, though not the duplicitous and cowardly behavior of his own government. Australia remains a colony in all but name. Australian intelligence agencies are, in effect, branches of the main office in Washington. The Australian military has played a regular role as US mercenary. When Prime Minister Gough Whitlam tried to change this in 1975 and secure Australia’s partial independence, he was dismissed by a governor general using archaic “reserve powers” who was revealed to have intelligence connections.

WikiLeaks has given Australians a rare glimpse of how their country is run. In 2010, leaked US cables disclosed that key government figures in the Labor Party coup that brought Julia Gillard to power were “protected” sources of the US embassy: what the CIA calls “assets.” Kevin Rudd, the prime minister she ousted, had displeased Washington by being disobedient, even suggesting that Australian troops withdraw from Afghanistan.

In the wake of her portentous rise ascent to power, Gillard attacked WikiLeaks as “illegal” and her attorney general threatened to withdraw Assange’s passport. Yet, the Australian Federal Police reported that Assange and WikiLeaks had broken no law. Freedom of information files have since revealed that Australian diplomats have colluded with the US in its pursuit of Assange. This is not unusual. The government of John Howard ignored the rule of law and conspired with the US to keep David Hicks, an Australian citizen, in Guantanamo Bay, where he was tortured. Australia’s principal intelligence organization, ASIO, is allowed to imprison refugees indefinitely without explanation, prosecution or appeal.

Every Australian citizen in grave difficulty overseas is said to have the right to diplomatic support. The denial of this to Assange, bar the perfunctory, is an unreported scandal. Last September, Assange’s London lawyer, Gareth Peirce, wrote to the Australian government, warning that Assange’s “personal safety and security has become at risk in circumstances that have become highly politically charged.” Only when the Melbourne Age reported that she had received no response did a dissembling official letter turn up. Last November, Peirce and I briefed the Australian Consul-General in London, Ken Pascoe. One of Britain’s most experienced human rights lawyers, Peirce told him she feared a unique miscarriage of justice if Assange was extradited and his own government remained silent.