Protesters in capital pledge to stay despite ban

WASHINGTON (Reuters) – Defiant anti-Wall Street protesters in Washington vowed to remain peacefully entrenched in two parks near the White House on Monday despite a police order to stop camping on federal land, raising the specter of possible confrontation.

The U.S. National Park Service, in its first challenge to the demonstrators, said last week it would start enforcing a ban at noon on Monday against camping in McPherson Square and Freedom Plaza, where protesters have camped out since October.

It ordered bedding and cooking equipment removed but said tents could remain as a protest symbol if flaps stayed open. While many protesters told Reuters they would comply with the order, blankets were still visible in some tents.

After a cursory inspection of the McPherson Square camp, police remained on the outskirts and no arrests had been reported by late afternoon. Protesters said police appeared hesitant to move in while television crews thronged the area.

While similar “Occupy” protests against social and economic inequality in other U.S. cities have been shut down by police, the demonstrations in the capital have survived an unusually warm winter and a permissive approach by federal authorities reluctant to provoke confrontation.

Despite their small numbers, the Washington protesters enjoy outsized media attention because their camps are just blocks from President Barack Obama’s official residence and one is next to K Street, a wide thoroughfare that is home to many lobbyists and is synonymous with corporate influence in the capital.

While Obama has not explicitly backed the protests, he has made economic inequality a central theme of his re-election campaign and called for higher taxes on wealthier Americans, angering his Republican opponents.

McPherson Square protesters set up a huge tent decorated with stars and moons over a statue of Civil War General James McPherson in the center of the square to protest the police order. “The people united will never be defeated,” they chanted.

Tensions rose in the “Occupy DC” camps after police used a stun gun on one protester on Sunday. More than 400 people were arrested during violent anti-Wall Street protests in Oakland, California over the weekend.

“We’re not going to fight, but we’re just going to make it difficult,” said Jake Roszack, 22, from New York, who had built a barricade of spare wood, tents and cardboard, around his personal belongings and those of his friends.

A U.S. Park Police spokesman, David Schlosser, said arrests would be made on a case-by-case basis. “We’re very pleased that we’re getting some voluntary compliance,” he said.

Inspired by the Arab Spring, “Occupy” demonstrations began in New York in September and spread across the United States and to other countries.

Protesters are targeting the growing income gap, corporate greed and what they see as unfair tax structure favoring the richest 1 percent of Americans. Washington protesters also cite other pet causes, including joblessness, big agriculture and the homeless, some of whom sleep in the park.

The U.S. capital, site of historic demonstrations over the decades, so far had done little to deter the protesters, drawing a rebuke from congressional Republicans who accuse the Obama administration of sympathizing with the groups and refusing to enforce park rules – a charge denied by park officials.

The National Park Service regulates both parks and forbids camping on federal land not designated as a campground. Local city officials have complained about squalor, rats and trash.

The number of protesters in the Occupy DC camps fluctuates, but city officials estimate there are less than 100 in total.

The Occupy protests had faded over the last few weeks but flared anew on Saturday when violence broke out in Oakland. 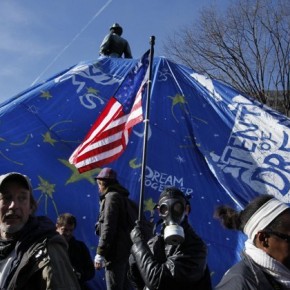 Officials in Charlotte, the site of the Democratic National Convention this September, began taking down tents under cover of a police helicopter even though protesters said they had complied with rules to remove their belongings. Police said seven protesters were arrested for resisting orders to leave their tents.