The People vs The United States

The United Nations is empowered, under Article 1 of its Charter, to: “maintain international peace and security”, to “develop friendly relations among nations”, “to achieve international co-operation”, and “to be a centre for harmonizing the actions of nations in the attainment of these common ends.”

Article 2 states that its members, “shall act in accordance with the following principles”:

The United States of America assumes the role of international arbiter and the role of policing the planet. A role rightfully granted to the United Nations. It is widely and implicitly assumed the USA carries this burden and this assumption is rarely challenged.

The World Court was established by the UN as the body to enforce international law, to ensure that no nation or leader(s) can infringe upon the sovereignty of others. It was established after World War 2 to ensure no nation or body of nations can violate elemental principles of statehood and human rights. Germany did aim to take over control of the world through terror and their own brand of exceptionalism.

The UN and the World Court operate to ensure that basic rational principles governing relations between nations are not violated. The UN is careful to ensure the it does not infringe upon the sovereignty of nations and at the same time, ensures that human beings are protected, however minimally, against war crimes and belligerent states aimed at controlling others. 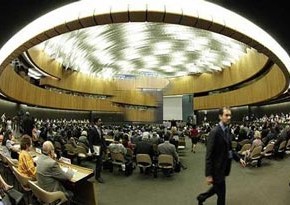 Before and increasingly since that ruling, the United States has violated and continues to violate International Law and generally accepted norms in favour of what it terms its national security or, national interests. It operates arbitrarily and is often outrageously belligerent and aggressive to the enemy du jour.

The time has come for the United Nations to stand up to the United States of America. It is a nation that, similarly to Germany in the last century, aims to take the role of overseer of all nations.

The USA appears to be under the control of madmen. Barack Obama speaks and appears to be reasonable and even progressive. But his actions indicate that he may be quite mad and or/dull. It appears that he is neither. It appears he is under the control of very wealthy and powerful banks and corporations. His role as President has turned this apparently sensitive and intelligent man into a war criminal. Although he is well educated in Constitutional Law and was a Senior Lecturer on the subject at the University of Chicago Law School, as President, he signed away fundamental Constitutional and habeas corpus rights in favour of political expediency. Something’s amiss.

It manifests most noticeably vigorously through the American state. It demands the state assume control of every corner of the world, as if it’s the American state’s inalienable right. It renders the UN a servile body existing only to serve its national interests.

If we were to concede that view, that the United States has the moral high ground to police the world, we could take the notion seriously. For instance, if the USA did promote human rights (as it claims), if their interventions were not based in psychopathic designs, and if there was consensus the USA assume the role of the UN as arbiter of international conflicts, doing so would give one nation control of people that have had no choice in its leaders or decisions. Doing so would be patently undemocratic.

No reasonable person could make such arguments. American ‘missions’ are being carried out all over the world. One such mission has left Iraq critically unstable. Saddam Hussein’s Iraq was a paradise compared to the current mess left behind by the Americans. Carnage and volatility continue in Afghanistan. Drone slaughters in Pakistan are starting up again after a brief hiatus. In short, everything the Empire touches turns to hell on earth. As bystanders, we get the impression this nation, the most heavily armed nation on the planet, should not be trusted to run with scissors.

Their pathetic accomplices like Canada, France, and the United Kingdom etc. are no better. After NATO’s intervention, Libya is strained, unstable, and civil war is likely. Gaddafi loyalists and the Libyan people will not turn a blind eye to the loss of the most generous social programs and standard of living in Africa. A standard of living that easily surpassed anything millions of disenfranchised Americans or Canadians could dream of.

NATO, this ‘axis of evil’, is splattering blood all over the Muslim world and there isn’t much to suggest it’s going to stop.

Presidential hopefuls Newt Gingrich and Mitt Romney are trying to out-do each other in their hawkish posturing. To the shock of anybody listening, they have uttered threats on Cuba and specifically, Castro, who has retired from politics. This doesn’t matter. The American narrative in no more sophisticated than a Bugs Bunny cartoon. Castro is ‘a bad guy’ and as such, is in real mortal danger. If Obama manages to ‘take him out’, it will play large to the mentally dull and extremely violent American audiences they aim to please.

Western nations (includes Israel/ not Venezuela or Cuba in this cartoon) are apparently okay with anything and everything that oozes out of the American insane asylum. Money and power rule, reason and diplomacy are not taken seriously. And now, at Israel’s pleasure, Iran appears to be on deck. There promises to be plenty of war and excitement. And once again, politicians mouth dim rationalizations; Iran may produce weapons of mass destruction, they violate human rights, they support terrorism and so on. And in the meantime, the USA and its quisling lapdogs are more guilty of what they accuse ‘the bad guys’ (Iran) of possibly doing sometime in the future – maybe. The ‘good guys’ in this cartoon terrorize like nobody else. They actually drop bombs on populations, they spit on habeas corpus, they have the most and the largest weapons of mass destruction. And they use them!

The absurdity of all this is whispered behind closed doors. Politicians in Latin America, in Asia, in Russia, in the Middle East and in Africa cautiously discuss the alarming nature of this madness. They are at a loss of possible ways to respond. Obviously, they don’t want to be labelled ‘a bad guy’.  The consequences are dire. Over the past few years, America’s enemies; Saddam Hussein, Osama bin Laden, Mohammar Gaddafi, Anwar al-Awlaki and his son and many others that are not so famous have been murdered by the President of the United States or proxies.

The man America and the world believed would be sane and reasonable, Barack Obama, has just delivered a State of the Union speech where he bragged about the bravery of the American military as they successfully carried out the murder of a sick old man in Pakistan. This was quickly followed up with GOP politicians trying to out-do each other, playing to Florida voters, promising to kill another old man. America has gone completely insane. It is a nation out of control.

The genesis of the United Nations was in response to a world hurting after Germany had gone completely mad. The UN was created to respond to this kind of developing climate. The uncomfortable and possibly dangerous task of standing up to these bullies must be done. The same weather patterns are become clear with each passing month. It is time to stop being polite and diplomatic to a nation that is anything but diplomatic and polite. It is time to make the madmen uncomfortable. The people of Iran, Cuba, and Venezuela are under imminent threat. In reality, the people of all nations, including the United States and Israel, are under the very same threat.

To restore sanity and to end the arbitrary and dangerous power held by rogue states (such as the current configuration in the United States) we must make our voices heard through protests and through activism. We must work in concert with the voices of reason at the UN. And they must work with us.  The United Nations is far from homogeneous. There are voices for peace, reason, and rule of law that are being drowned out by the psychopath element. Their efforts are stonewalled. We must help them through increasing the level of discomfort for those that aim to wage war.

At this point the people of Iran are in grave danger. We, the people of the United States, Israel, Canada, the UK – and all nations, must stand up and demand that we will not accept war on Iran. We must empower the voices of reason at the UN to enforce its Charter and demand that this drive to endless war be stopped. We need to develop connections in solidarity with each other and with politicians we may disagree with on many issues but remain committed to rule of law and reason. We may disagree with Ron Paul on the right and President Chavez on the left, but as long as they are committed to rule of law and reason, they are allies. Like them or hate them, they stand on principles and against the madness and irrationality of war and Empire.

Should the UN cower to the designs of the madmen of corporate America and nationalist Israel and sanction war against the people of Iran; if it allows the United States to continue to police the world in ‘its’ own interests, and if it continues to turn a blind eye to the excessive human rights abuses carried out against men, woman, and children; most notably, the dropping of bombs on them, we must then ask ourselves – and the UN must ask itself, what is the point of existing at all?