The LA Police Department, known for its brutality and corruption over the years, and the U.S. military conducted joint “tactical exercises” in downtown LA this week.

One Black Hawk, a helicopter that has served in combat in Grenada, Panama, Iraq, Somalia, the Balkans, Afghanistan and other areas in the Middle East, and four OH-6 choppers – “Little Birds” – flew over the city during the exercise.

At one point they flew just above the US Bank building downtown and later flew over the Staples Center as the Los Angeles Lakers played against the Los Angeles Clippers inside.

According to a Department news release on January 23, “Multi-agency tactical exercises are to be conducted during evening hours around the downtown area January 22-26, 2012.”

Truthout doesn’t take corporate funding – this lets us do the brave reporting and analysis that makes us unique. Please support this work by making a tax-deductible donation today: click here to donate.

“The Los Angeles Police Department will be providing support for a joint military training exercise in and around the great Los Angeles area,” the release stated. “This will be routine training conducted by military personnel, designed to ensure the military’s ability to operate in urban environments, prepare forces for upcoming overseas deployments, and meet mandatory training certification requirements.”

“This training has been coordinated with local authorities and owners of the training sites. The training sites have been carefully selected to ensure the event does not negatively impact the citizens of Los Angeles and their daily routines,” the Department claimed.

“Lastly, safety precautions have been taken to prevent risk to the general public and the military personnel involved. As such, this training is not open to the public,” the Department concluded.

Members of the Occupy movement were outraged by the joint exercises by the LA police and military, in light of the unprecedented campaign by the US government and local police agencies against the First Amendment, Bill of Rights and the Constitution.

“Open to the public?” the Occupy LA Morning Report blog responded. “You mean the deployment of military assets in an urban area is supposed to be inconspicuous? The video of these ‘exercises’ would be something to behold, probably much like what we saw in Iron-Curtain Eastern Europe and Tiananmen Square. But since the NDAA 2012 was passed nothing seems surprising any more.”

“It appears America is preparing for war against its own citizens. I don’t know how else to put it. If someone can make a suggestion for another way of interpreting this, please do,” the blog stated.

Joint military exercises have also been conducted over Boston, Massachusetts and Little Rock, Arkansas over the past six months.

These joint military training exercises become very ominous in the wake of the repression of the Occupy movement by police departments throughout the nation.The crackdown on the First Amendment by the cities of Los Angeles, Sacramento, Oakland San Francisco and others across the country is apparently part of a nationally coordinated campaign by the Department of Homeland Security and other federal law enforcement agencies in collaboration with local police departments, as exposed by author Naomi Wolf in her November 25 article in the UK Guardian.

“So, when you connect the dots, properly understood, what happened this week is the first battle in a civil war; a civil war in which, for now, only one side is choosing violence,” wrote Wolf. “It is a battle in which members of Congress, with the collusion of the American president, sent violent, organised suppression against the people they are supposed to represent.” 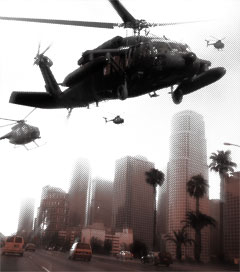 The exercises become even more ominous when you consider that President Barack Obama signed the National Defense Authorization Act (NDAA) on New Year’s Eve, allowing indefinite detention to be codified into law.

Obama had threatened to veto an earlier version of the NDAA, but reversed course shortly before Congress voted on the final bill. While President Obama issued a signing statement saying he had “serious reservations” about the provisions, the statement only applies to how his administration would use it and would not affect how the law is interpreted by subsequent administrations, according to the American Civil Liberties Union (ACLU) in a statement.

“The statute is particularly dangerous because it has no temporal or geographic limitations, and can be used by this and future presidents to militarily detain people captured far from any battlefield,” the ACLU said.

President Barack Obama brought us “Change,” all right, “Change” for the worse!