Thousands of Kyrgyz prisoners have ended a 10-day hunger strike against jail conditions that saw nearly 1,200 inmates sew up their lips or mutilate themselves in protest, according to an official.

“All the prisoners in Kyrgyzstan have ceased their hunger strike,” Kubanychbek Kenenbayev, the deputy head of the prisons service, told reporters on Saturday, saying that a women’s prison in the village of Stepnoe was the last to agree.

Around 6,400 prisoners were on hunger strike nationwide and 1,175 had sewn their mouths closed with materials from needle-and-thread to staples and building wires.

“We were on hunger strike since January 16, we have ended it today. Now everything is alright,” one of the inmates of Bishkek’s main prison, Adilet, told the Reuters news agency. 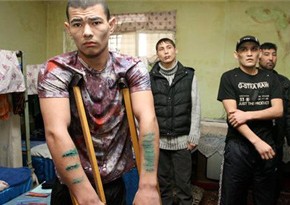 “Our demands were to improve living conditions, to give us mattresses and better food and to end the lawlessness.”

According to Sheishenbek Baizakov, head of Kyrgyz State Penitentiary Service, the hunger strike was started with demands of the re-opening of so-called “common” prison cells, in which inhabitants had the freedom to move around in day and night.

The strike also came after the prison authorities tightened control in Kyrgyz jails after riots that broke out in a Bishkek prison on January 16, apparently over the transfer of a crime boss to a different jail.

The first riot started in Detention Centre 1 in Bishkek, when prisoners burned mattresses and some slashed their wrists during an ordinary check-up.

The prison administration called for riot police to restore order and the conflict ended up with 30 prisoners and five guards injured, Russian news agencies reported.

On Friday, during a search of Bishkek’s main prison, where 209 inmates stitched their mouths shut, one of the convicts protested against the search.

“I can’t take it anymore. We haven’t eaten for 11 days, we’re not strong enough to clean up. Look, my hands are shaking, everything hurts inside,” one of the inmates said, addressing the guards.

“I have been asking to put me to hospital for three days already, and they still haven’t sent me there.”

Authorities insisted their duty was to protect the rule of law against organised crime and claimed the prisoners were striking in solidarity with convicted criminal boss Damir Saparbayev rather than over human rights.

“They ended the hunger strike after being convinced that there would be no more excesses on the part of their guards,” added Kyrgyzstan’s rights ombudsman Tursunbek Akun, without giving further details.

He said that around midnight the prisoners had helped each other to un-sew their lips but they were now turning to medical treatment to ensure that their mouths were not infected.

“The prisoners have unsewn their lips. They have started to take in food again. Many have become weak from hunger,” he said.

Nearly 7,600 inmates are incarcerated in Kyrgyz prisons, while a further 7,000 convicted of minor offences are confined to their home region and required to check in daily with police.